I told Atticus I didn’t feel very well and didn’t think I’d go to school any more if it was all right with him.

-Harper Lee, To Kill a Mockingbird

I did not know this was a Thing. But apparently, Don Quixote: The Ingenious Gentleman of La Mancha will hit theaters in 2015—starring James Franco, of all people. (At least, that’s what all the press is saying. If you look at that IMDb page a little more closely, though, you’ll see that James Franco isn’t even playing Don Quixote—he’s playing Gines de Pasamonte, the galley slave freed by Don Quixote who goes on to steal Sancho Panza’s donkey and, later, cheat the pair of them out of a lot of money. With help from a “psychic” monkey.

Anyway, the point is that “starring James Franco” might be an overstatement.)

I can’t be sure this is real until I’ve seen a trailer. But it seems real—and in the event that it is real, I am preparing my unbridled enthusiasm. I am 250 pages away from the end of Don Quixote and a huge fan of book-to-film adaptations. (Except for any that include talking CGI animals. Especially Ella Enchanted, Hollywood’s most conspicuous cry for help.)

See you soon on the big screen, Knight of the Lions. Unless your horse starts talking in the trailer, I’m there.

If you’re the Reading Challenge/New Year’s Resolution/long-term goal type, this checklist from Goodwill Librarian is full of good ideas (and a few weird ones. A book with antonyms in the title? Um, OK).

I like the idea of consciously diversifying, but I also like to read and reread all the books written by a specific, beloved author in the hopes that s/he will one day come knocking on my door to award me “#1 Fan” status and the accompanying baseball cap. So… dilemma.

Anyway, whether your book hobby is broad or narrow, happy reading!

Update: If you want to see how my 2014 reads stacked up against this challenge, check out this post from January 2015.

-John Steinbeck, The Grapes of Wrath 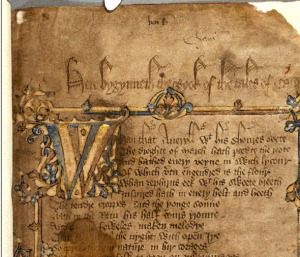 In the summer of 1170, Thomas Becket, Archbishop of Canterbury, royally pissed off King Henry II. (Pun intended, obviously.) Tired of listening to Henry whine, a group of his loyal followers rode off to Canterbury Cathedral and murdered poor Thomas, mid-Vespers.

Fast-forward a couple hundred years, and Canterbury Cathedral had become the hot destination for European travelers. A pilgrimage from Southwark in South London to the shrine of Thomas Becket at Canterbury Cathedral provided the frame for Geoffrey Chaucer’s 14th-century masterpiece The Canterbury Tales.

Canterbury Cathedral: Trying too hard since 1077.

This not-quite travel narrative is made up of a collection of short stories, told in turn by each member of a group of thirty travelers. The tales, penned in the English vernacular, showcase Chaucer’s mastery over diverse forms of writing (including both poetic and prose styles) and his fluency in human nature across social strata.

While 120 stories were planned, with each pilgrim sharing a total of four stories, only 24 were completed. But rather than calling Chaucer an underachiever, we’ll use the more polite term: “ambitious.”

The exploration of social class is one of the most compelling aspects of The Canterbury Tales. The Knight’s Tale is one of chivalry; the Miller’s Tale is raucous and lewd; the Pardoner’s Tale (hypocritically) preaches morality. The class tensions of Chaucer’s era come out in the form of spats between storytellers.

One of my favorite moments is Chaucer’s turn to tell his own tale. (He has fictionalized himself as a reticent member of the traveling party.) He begins the frivolous, rhyming Tale of Sir Topaz, a knight in search of the Elf Queen he has dreamed about. When Sir Topaz is preparing to go to battle against a giant, the host of the pilgrimage interrupts Chaucer to beg him not to subject the travelers to the rest, and to tell a different story—this time in prose. Fictional Chaucer then goes on to tell the Tale of Melibee, which turns out to be long, tedious, and moralizing to the point of stupor.

Chaucer’s self-portrayal as the worst storyteller of the bunch is hilariously ironic and endearingly humble. Best of all, the Tale of Sir Topaz has remained a source of perplexity for literary scholars over several centuries.

The Madonna/whore characterization of nearly every female. The Tale of Melibee (obviously). The occasional crude/gross-out humor (Adam Sandler himself would blush). The Pardoner, in general.

Overall, the tales bounce along nicely under Chaucer’s genius, like a trotting horse on its way to do some sightseeing in Kent. And truly, for a manuscript written in between the Black Death and the Hundred Years’ War, this is an admirably perky read.

This is a no-brainer. The Canterbury Tales is brilliant, insightful, innovative, expertly crafted, and thoroughly entertaining.

Well, well, try anything once, come hot, come cold!
If we’re not foolish young, we’re foolish old.
I long have known myself what Love can do,
For, in my time, I was a lover too.

Age has a great advantage over youth
In wisdom and by custom, that’s the truth.
The old may be out-run but not out-reasoned.

Who then may trust the dice, at Fortune’s throw?

Then you compared a woman’s love to Hell,
To barren land where water will not dwell,
And you compared it to a quenchless fire,
The more it burns the more is its desire.

If the law compels you to swear, be ruled in your swearing by the law of God, as says Jeremiah, chapter four: “You shall keep three conditions: swear in truth, in judgment, and in justice.”

I gave my whole heart up, for him to hold. 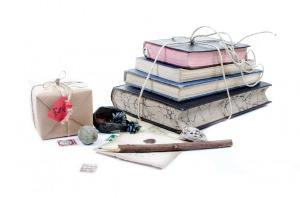 There are so many bookish gift guides at Book Riot that I don’t even know where to start. The bookstore, maybe? Ahhh it’s the most stressed-erful time of the year.

Anyway, here are some ideas for holiday gifts, or any self-giving you might be inspired to do as yet another cold, cranky winter reaches up to slap us all in the face:

Bookish Gifts for the Last-Minute Shopper

20 Books You Love to Give as Gifts

There’s even a guide-within-a-guide, namely the One Stop Book Shop: A Bunch of Bookish Gift Guides.

-Jack Kerouac, On the Road

Sometimes I really hate the things I like. I can’t be the only one. Sometimes I experience too much of a good thing, and I grow steadily more unappreciative, burnt out, and cranky. Sometimes the things I like go out of their way to decline in quality, like The Mindy Project. And sometimes (a.k.a. often), things that seem fun up to and including the moment you start doing them turn out to be some sort of miserable punishment for all the sins of your past lives—like camping, or watching any movie starring Tom Cruise, or kayaking upstream in a vengeful river. Or reading really, really long books.

Long books are great—sometimes. In those moments that you manage to pick up some momentum, or your favorite character is embarking on a physical or emotional adventure, or a brilliant author slips in some witty dialogue and you actually get the joke—or, especially, those moments where you get to heave that just-finished novel back up on the shelf in pure self-satisfaction (or shelf-satisfaction, oh yes I went there)—in those moments, you can be tricked into thinking you had fun the whole time… that those weeks and weeks of stubborn but tedious plot unraveling and text deciphering were totally worth it.

I wrote more on this theme for Headstuff last week in an article entitled “The 5 Stages of Reading a Very (Very) Long Novel.” It covers everything from Intrigue to Payoff, with a special emphasis on the agony and suffering that will inevitably follow your initial bout of determination and self-confidence.

Not that I would know anything about that.

And again she felt alone in the presence of her old antagonist, life.

-Virginia Woolf, To the Lighthouse