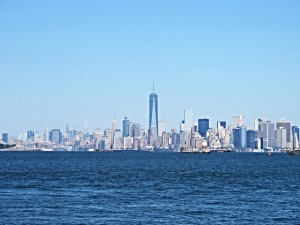 My father and brother are visiting this week, so every day brings a new touristy itinerary and the suspicion that New York’s climate has turned tropical this summer.

Anyway, our metropolitan meanderings inspired Sunday’s Quote of the Week as well as today’s post: my favorite quotes about New York City. Like most people, I find it crowded and fascinating and dirty and unique and loud and inspiring and ugly and beautiful. (And hot.) (And then very cold.) And while I may not belong here, for now, it’s home. So we’re doing our best to get along, New York and me.

It’s been seen and written through the eyes and fingers of so many unfairly talented writers—so, naturally, great New York quotes are easy pickings. Here are the best of the best, according to me:

The city seen from the Queensboro Bridge is always the city seen for the first time, in its first wild promise of all the mystery and the beauty in the world.

I would like to live in Iceland someday. It sounds like a fun place. Much more fun than Manhattan, where people sometimes spit at you for no reason.

It is an important and popular fact that things are not always what they seem. For instance, on the planet Earth, man had always assumed that he was more intelligent than dolphins because he had achieved so much—the wheel, New York, wars and so on—while all the dolphins had ever done was muck about in the water having a good time. But conversely, the dolphins had always believed that they were far more intelligent than man—for precisely the same reasons.

-Douglas Adams, The Hitchhiker’s Guide to the Galaxy

For in that city there is neurosis in the air which the inhabitants mistake for energy.

And still, on the summit of that hill he paused. He remembered the people he had seen in that city, whose eyes held no love for him. And he thought of their feet so swift and brutal, and the dark gray clothes they wore, and how when they passed they did not see him, or, if they saw him, they smirked. And how their lights, unceasing, crashed on and off above him, and how he was a stranger there. Then he remembered his father and his mother, and all the arms stretched out to hold him back, to save him from this city where, they said, his soul would find perdition.

-James Baldwin, Go Tell It on the Mountain

Who would’ve thought an island that tiny would be big enough to hold all our old boyfriends?

-Miranda Hobbes, Sex and the City

Cut off as I am, it is inevitable that I should sometimes feel like a shadow walking in a shadowy world. When this happens I ask to be taken to New York City. Always I return home weary but I have the comforting certainty that mankind is real flesh and I myself am not a dream.

Here is our poetry, for we have pulled down the stars to our will. 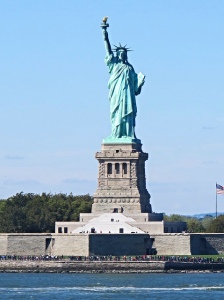