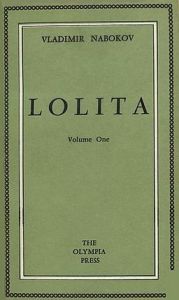 Lolita is hard to stomach. Let me make that clear right off the bat. A pull-no-punches back cover summary would describe a middle-aged academic (Humbert Humbert) lusting after, and ultimately sleeping with, his landlady’s twelve-year-old daughter (the eponymous Lolita). In other words, Lolita is the story of a pedophile and the child he rapes repeatedly over a two-year period. A spade is a spade is a spade.

But plot, as we know, is only one force at play in any story we’re destined to pick up. What makes Lolita fascinating—and it is, no doubt, fascinating—is the way the story is told. Nabokov, in this 1955 fictional memoir, toys to great effect with the idea of style vs. substance. Can the taboo turn to treasure if we polish it hard enough? Can a horrible story unfold beautifully?

The answer, it seems, is yes—and that yes is Lolita. Nabokov’s prose bounces and swings; stirs and sparks; snaps, crackles, and pops. He builds a rich literary world full of artistic allusions, foreign languages, and clever word play. As you twist and turn your way along the contours of each serpentine sentence, the intimate intensity of Humbert Humbert’s voice is so absorbing that you lose the will to resist. You nearly forget, mid-stream in his passionate plea for compassion, that this is a narrator who:

Suffice it to say that the writing is exceptional, to make any of the above fit for literary consumption—much less praise. Nabokov himself puts it best in the book’s foreword, written by a fictional academic editor upon publishing Humbert’s manuscript:

I have no intention to glorify “H.H.” No doubt, he is horrible, he is abject, he is a shining example of moral leprosy, a mixture of ferocity and jocularity that betrays supreme misery perhaps, but is not conducive to attractiveness. He is ponderously capricious. Many of his casual opinions on the people and scenery of this country are ludicrous. A desperate honesty that throbs through his confession does not absolve him from sins of diabolical cunning. He is abnormal. He is not a gentleman. But how magically his singing violin can conjure up a tendresse, a compassion for Lolita that makes us entranced with the book while abhorring its author!

All of this, though, makes our modern pop culture references to “Lolitas” not only inaccurate, but disturbing in the extreme. “Lolita” as an archetype should, by rights, have nothing to do with a sexually precocious schoolgirl, and everything to do with a victim of rape and other forms of abuse.

Equally sickening are the methods used to market Lolita, conflating Humbert Humbert’s hysteria of lust with an epic and enduring love. Whether he loves Lolita or not is arguable. But Vanity Fair‘s baffling interpretation of Lolita as “the only convincing love story of our century,” quoted on the back cover of my Vintage International paperback, is inarguably grotesque.

Threats to Lolita‘s existence were, of course, numerous and adamant. Four American publishers refused the manuscript. It was accused, following its publication by the Parisian Olympia Press in 1955, of being “pornographic,” “obscene,” and “anti-American.” It regularly appears on “Banned Books” lists. In spite of this (or because of it), Lolita has remained, for over 50 years, a beast of a bestseller, alternately captivating and horrifying its readers.

In the book’s afterword, written in 1956, Nabokov asserts that his now-classic tragicomedy has no moral. His goal, he insists, in answering the “initial shiver of inspiration” to write Lolita differed considerably:

For me a work of fiction exists only insofar as it affords me what I shall bluntly call aesthetic bliss, that is a sense of being somehow, somewhere, connected with other states of being where art (curiosity, tenderness, kindness, ecstasy) is the norm.

To that I say, with no misgivings, to Nabokov beyond the grave: Mission accomplished.

Read as a study in insanity, or a tale told from the villain’s point of view, Lolita is worthy of admiration (be it reluctant or enthusiastic). Read as a lesson in literary technique, Lolita is a masterpiece.

I have still other smothered memories, now unfolding themselves into limbless monsters of pain.

You have to be an artist and a madman, a creature of infinite melancholy, with a bubble of hot poison in your loins and a super-voluptuous flame permanently aglow in your subtle spine (oh, how you have to cringe and hide!), in order to discern at once, by ineffable signs—the slightly feline outline of a cheekbone, the slenderness of a downy limb, and other indices which despair and shame and tears of tenderness forbid me to tabulate—the little deadly demon among the wholesome children; she stands unrecognized by them and unconscious herself of her fantastic power.

It occurred to me that if I were really losing my mind, I might end by murdering somebody. In fact—said high-and-dry Humbert to floundering Humbert—it might be quite clever to prepare things—to transfer the weapon from box to pocket—so as to be ready to take advantage of the spell of insanity when it does come.

I am sufficiently proud of my knowing something to be modest about my not knowing all.