On the back cover of my Signet Classics edition of Sons and Lovers, E. M. Forster declares D. H. Lawrence to be “the greatest imaginative novelist of our generation.”

This is ironic for two reasons:

Sons and Lovers is no more than a protracted look at the Oedipus complex—and not a very insightful one, IMHO. At the head of the Morel family stand an alcoholic miner hated by his children and an anguished housewife adored by them. Eventually, the sons grow up and fall in love/lust, and the shit hits the fam. All of them spew a steady stream of verbal abuse at each other—father and mother and sons and lovers—from start to finish.

Apparently the “sex scenes”—by which I mean vaguely sensual forest romps—were considered obscene back in 1913. To the modern reader, they are too ambiguous to be sexy and too boring to advertise.

I am pleased to say Lawrence and I can call it quits now that I’ve put Sons and Lovers and Women in Love behind me. I fail to see how his work is in any way outstanding, well-crafted, or entertaining.

And that’s putting it nicely.

May I quote Bart Simpson? “I didn’t think it was physically possible, but this both sucks and blows.”

She could not be content with the little he might be; she would have him the much that he ought to be.

Then Dawes made a remark which caused Paul to throw half a glass of beer in his face.
“Oh, Mr. Morel!” cried the barmaid, and she rang the bell for the “chucker-out.”
Dawes spat and rushed for the young man. At that minute a brawny fellow with his shirt-sleeves rolled up and his trousers tight over his haunches intervened.

He loved her. There was a big tenderness, as after a strong emotion they had known together, but it was not she who could keep his soul steady.

She had a sense of comedy that was really exquisite, but she needed people, always people, to bring it out, with the inevitable result that she frittered her time away, lunching, dining, giving these incessant parties of hers, talking nonsense, sayings things she didn’t mean…

writes Virginia Woolf of her genteel heroine. That, and PTSD, provide the outline for this modernist masterpiece.

Modernism describes the literary period from around 1900 to the end of World War II—a period marked by dramatic experimentation with traditional narrative forms. Joseph Conrad’s Heart of Darkness, Franz Kafka’s The Trial, Marcel Proust’s In Search of Lost Time, and pretty much everything written by Joyce and Faulkner fall squarely into this category.

Woolf toys with both style and substance in Mrs. Dalloway (1925). The novel takes place over a single day, largely inside the minds of its two protagonists (the eponymous Clarissa Dalloway and a World War I veteran by the name of Septimus Warren Smith). Major themes include isolation and oppression, memory and madness, and the trauma inflicted on an entire generation by war and its aftermath.

I say give it a chance. Mrs. Dalloway will walk you through the streets of Westminster, buy you flowers, and throw you a party. And even if you hate London, and flowers, and parties, hey-o… this book is super short.

It’s hard to pull off a meaningful “day in the life” portrait, but Woolf manages it with seeming ease.

The world wavered and quivered and threatened to burst into flames.

She had come to feel that it was the only thing worth saying — what one felt.

The compensation of growing old, Peter Walsh thought, coming out of Regent’s Park, and holding his hat in his hand, was simply this; that the passions remain as strong as ever, but one has gained — at last! — the power which adds the supreme flavour to existence — the power of taking hold of experience, of turning it round, slowly, in the light. 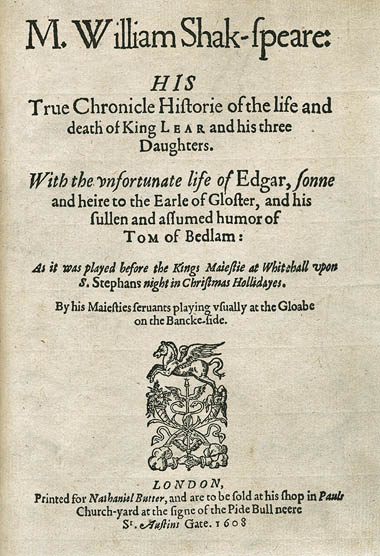 Like I always say (or said, at least, that one time): If you’re going to write a tragedy, make it the TRAGEDY TO END ALL TRAGEDIES.

So… yeah. Good luck with your tragedies, and all.

King Lear wants to retire. But first, he has to divide up his kingdom. Easy, he thinks. I’ll just slice it into thirds and pass one wedge to each daughter. I’ll even put a little whipped cream on top. That’ll be easy, too, because it comes in this handy aerosol can.

But it’s not easy. Nothing is easy for idiots. King Lear decides to give the largest share of land to the daughter who loves him the most.

The ass-kissing that follows is exquisite.

But, soon, everything starts to suck. Daughters are disowned. Earls are fired. Kings run naked across stormy heaths. Eyeballs get torn out. And then everyone dies.

In other words: King Lear is your family Thanksgiving.

The rain it raineth every day.

But his flawed heart—/Alack, too weak the conflict to support—/’Twixt two extremes of passion, joy and grief/Burst smilingly.

If Fortune brag of two she loved and hated/One of them we behold.

Noteworthy features of the so-called “World State” in Aldous Huxley’s famous (and infamous) 1932 novel include:

With this in mind, we get to know Bernard Marx. Bernard is an Alpha but feels like an outcast, which is hardly fair. So on his trip to a “Savage Reservation” (similar to the Native American reservations of today), he picks up a souvenir that will catapult him to celebrity: his boss’s son, John, raised by his mother and Shakespeare’s collected works among the villagers there.

Bernard decides to take John back to London as a kind of social experiment. The experiment, as you could probably guess, is a disaster, rife with shame, drug abuse, self-flagellation, and exile (in that order, or almost).

It’s got something—I’m just not sure if it has enough of that something.

Wouldn’t you like to be free to be happy in some other way, Lenina? In your own way, for example; not in everybody else’s way.

But I don’t want comfort. I want God, I want poetry, I want real danger, I want freedom, I want goodness. I want sin.

Lying in bed, he would think of Heaven and London. 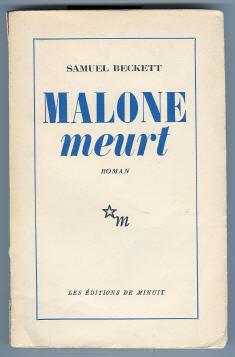 In the words of the great Wikipedia Britannica:

One does not get a sense of plot, character development, or even setting in this novel.

Oh no—no, of course not, because that would be preposterous. That would result in a book, whereas this is meant to be…

Well, I don’t know, really. You’d have to ask Samuel Beckett, if he’s not too busy listening to Fleetwood Mac. All we’ve been able to make of this postmodernist mess (yes, we’re into post-modernism now) is that it largely records the rambling interior monologue of Malone, an old man lying naked in a hospital OR insane asylum (we can’t be sure, because Malone isn’t). Highlights of this meditation include a nurse with a crucifix carved into her tooth, a bearded giant (aren’t they all?), a boat and a picnic, a dropped pencil, and a boy named Sapo, who is later renamed Macmann because Malone can’t “stomach” the name Sapo anymore.

…which just goes to show how easy it is to confuse lunacy with genius.

I kid, I kid! Although now that I mention it, history is teeming with examples. Hmm.

Your guess is as good as mine. EVEN IF YOU’VE NEVER READ IT.

There is naturally another possibility that does not escape me, though it would be a great disappointment to have it confirmed, and that is that I am dead already and that all continues more or less as when I was not.

It is because it is no longer I, I must have said so long ago, but another whose life is just beginning. It is right that he too should have his little chronicle, his memories, his reason, and be able to recognize the good in the bad, the bad in the worst, and so grow gently old all down the unchanging days and die one day like any other day, only shorter.

Let me say before I go that I forgive nobody. I wish them all an atrocious life and then the fires and ice of hell.