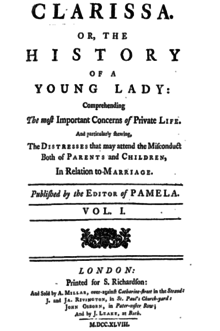 To my very great surprise, I felt an immediate and intense bond with the fierce but kindhearted Clarissa this book is named for. Granted, no one has ever tried to force me into marriage with a middle-aged prick, or conned me into living in a house above a brothel, or ordered my arrest on false charges just to watch my spirit break. But this book isn’t so much about what happens to Clarissa as how it makes her feel.

And how it makes her feel is pissed.

Published in 1748 on the heels of Samuel Richardson’s enormously popular Pamela, Clarissa is tremendously long, tediously slow, and stiflingly intimate. But it’s also meticulously crafted, remarkably thoughtful, and endlessly moving. By far the most extensive character study of The List, Clarissa is an epistolary novel of epic proportions: 1,499 pages, to be exact. Letters between Clarissa and her BFF Anna, as well as Lovelace and his BFF Belford, make up the bulk of the narrative.

Yep: Clarissa‘s the one on the bottom.

When the story kicks off, Clarissa is already knee-deep in a sea of drama. Her family wants her to marry the un-marriable likes of Roger Solmes and, when she refuses, locks her up in her own bedroom. Clarissa’s crush, Robert Lovelace—a well-known rake hated by her entire family—tricks her into running away with him. In an apartment above a brothel, lost in the unholy streets of London, Lovelace schemes, manipulates, and harasses Clarissa into marrying him or sleeping with him—whichever comes first.

Clarissa, more than a little resentful at all these affronts to her reputation and integrity, plots her escape(s) with occasional success but too little haste. Lovelace, a practiced sociopath, calls most of the shots—and although Clarissa manages one final getaway worthy of Lovelace himself, his London minions call for her arrest on false charges and see her thrown in jail. This last indignity is too much for Clarissa, who, after her release, fades out in a slow death. In easily the most satisfying moment of the novel, Lovelace is killed in a duel by Clarissa’s cousin, Colonel Morden.

One of the quickest ways to make me hate a protagonist is for the writer to tell me how much I should love them (see: Isabel Archer, Rory Gilmore). I Just Can’t with the whole “look-how-special-and-superior-this-protagonist-is” Festival of Praise that, by the way, only ever seems to follow female characters. I’m convinced it’s a symptom of the Madonna/Whore Complex that terrorizes classic fiction, and let’s just say I’ve never had much patience for Madonnas.

But somehow my opinion of Clarissa survived even this. Yes, it was annoying to hear every character gush uninterruptedly about Clarissa’s consummate perfection. Yes, I lost count of the references to Clarissa’s flawless beauty, unsurpassed intellect, and “angelic” purity. Yes, I resented the implication that there is one right way to be a woman, and that way is Clarissa.

But somehow Clarissa remains, for the most part, utterly relatable. It’s hard not to identify with a character who puts her every thought on paper with such careful precision. She lays out her emotions, her motives, and her logic with charismatic warmth, showing down even Lovelace’s seductive (if warped) arguments. Indeed, you root for her all the more for being surrounded by villains and lunatics.

Because, of course, while Clarissa is an interesting read, it’s also an infuriating one. Lovelace pressures Clarissa into corresponding with him, tricks her into running away with him, coerces her into living with him, guilts her into spending time with him, violates her privacy, gropes her without her consent, and then, ultimately, drugs and rapes her—and still sees HIMSELF as a victim. He curses her virtue as the barrier that keeps him from what he wants most, even though her virtue is the very thing that attracted him to her in the first place. He is regularly occupied by efforts to “punish” (his word) the women around him for doing anything he doesn’t specifically condone/authorize.

Clarissa, for her part, berates and blames herself for her errors in judgment, views her disobedience as a cautionary tale, and wishes for death. She never gives up hope of making amends with her garbage family, and pities Lovelace almost as much as she loathes him. And then there’s the whole part where she just has to emerge from her final hiding place multiple times a day to go to church, knowing she risks recapture by Lovelace. Just pray at home, Clarissa! Or, better yet, face the fact that God might not be listening anymore.

So, yeah, infuriating. I spent many of Clarissa‘s 1,499 pages with my head in my hands, screaming, What is wrong with you people??? But I know what’s wrong with them. The 18th century is what’s wrong with them. Anna and her mother go from urging Clarissa to prosecute Lovelace in one letter to encouraging her to marry him in the next. Belford excoriates Lovelace for his treatment of Clarissa but doesn’t bother to, like, CALL THE POLICE. All in all, this book is a feminist nightmare: a parade of male entitlement, a showcase of rape culture, and a testament to just how little control women have had, historically, over their own destinies.

Highlights of the novel are the bullshit-intolerant Anna, often referred to as “flighty” or “saucy” (and, on one memorable occasion, “saucebox”), and the darkly hilarious scene in which Clarissa buys her own coffin. Lowlights are everything Lovelace says, does, and thinks, and when Clarissa’s family finally forgives her in a letter that arrives one day too late.

Yes, but I would never recommend it to a friend. This is a book for masochists, written by a sadist.

I imagined for a long while that we were born to make each other happy: but, quite the contrary; we really seem to be sent to plague one another.

I may venture to say, that many of those who have escaped censure, have not merited applause.

For what are words but the body and dress of thought?

Poor man! He has had a loss in losing me! I have the pride to think so, because I think I know my own heart. I have had none in losing him!

But love, me thinks, as short a word as it is, has a broad sound with it.